This story was written by Melissa Muscat.

What an amazing two A League seasons I have not only witnessed, but fortunately been a part of. Thank you to all at Sydney FC for the opportunity to experience two of the best sporting seasons of my entire life, possibly only eclipsed by Manchester United winning The Treble in 1998/99. This scintillating local team we currently have delivering continued success, our amazing coach and his equally amazing coaching staff, the executive committee, the membership team, and all others behind the scenes, from all us Sydney die hards, we say thank you.

The regular season for 2017/2018 has come to a close and sadly the final regular season game at Allianz Stadium, Moore Park also. It’s a bittersweet feeling when it’s announced that an iconic stadium will be knocked down and rebuilt. Wonderful that our team gets a new world class stadium to play in for the future but sad we will be away from our ‘home’ for a few years, possibly split from our bay buddies who have become like family to share our sporting love and passion with.

There is however, still much to celebrate. First ever back to back A League Premiers, one defeat at Fortress Allianz in 27 home games of the regular season, most goals scored in a season, first team to get to 60 points or more in consecutive seasons, most wins and goals in an A League season, the biggest ever Sydney derby win. And there were more last year. What a feat. The elation hit each week, just when we thought we’d seen it all. That is what constitutes a successful sporting team and an enjoyable sporting experience, along with the special moments you share with those equally as passionate around you, week in, week out.

Whilst another hugely successful Sydney FC season is drawing to an end, the club will be  farewelling supercoach Graham Arnold to our national team the Socceroos, and the Sky Blues faithful will be a little bit ‘homeless’ for the next few years, we also anticipate an exciting finals series. We’re not done yet. Saturday night sees Sydney FC face one of their biggest and oldest rivals, Melbourne Victory. There is always much hype, excitement and hostility when these two teams meet, on and off the park, but Saturday night promises to elevate that to another level.

As has been widely publicised throughout the week, Melbourne Victory have lost the last seven games to Sydney, ensuring Saturday night’s elimination final will be an explosive one. Like Besart Berisha and Kevin Muscat (no relation) need another excuse to fire up! The all important match up between these two sides, also known as ‘The Big Blue’, due to the fierce rivalry and colour of their home jerseys, is a must win for both teams, with only the victor progressing through to the Grand Final on the 5th May. There are no second chances after Saturday night.

Melbourne, a proud club with history, will be looking to make amends on their not so strong recent record with Sydney. Anything else but a Grand Final appearance and win for Sydney FC in the coming week, would be unjust and heartbreaking. With numerous records broken over two seasons and arguably the most successful A League club in history, Sydney need to finish this fairytale by winning the next two games. The rest is history. 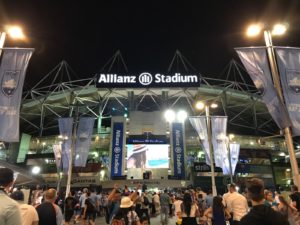