If there was ever an athlete ‘born’ to participate in a particular sport, it’s Sergei Evglevski. He will represent Australia at the 2021 Tokyo Olympic Games in the pistol events.

Evglevski is the son of Sergei Evglevski Sr, a two-time Australian Olympic team gunsmith and of Lalita Yauhleuskaya of Belarus.

Even though Evglevski’s parents both participated in the discipline and his father also coached, Evglevski grew up playing a number of sports.

“I played other sports when I was young and I was quite good at other sports, but I think the skills I learnt from shooting were helpful,” said Evglevski.

“My dad encouraged me to exercise when I was younger and I would do non-traditional exercises that were good for strength and body stability.

“I really focused on flexibility and balance and did many exercises that shooters do to warm up now.”

Whilst Evglevski’s parents never pushed him into the sport, they certainly encouraged him. He had his gun license at age 13. It also helped that he was able to celebrate his mother’s successes.

As a child, he would join his mother on the medal podium when she compete in events in Australia. After Yauhleuskaya won three gold medals and one silver medal at the Melbourne Commonwealth Games in 2006, he used those medals to his advantage.

Evglevski remembers taking his medals in to show his classmates. That ‘show and tell’ had some unexpected benefits.

“I ended up getting a whole day off school because it was right after the Commonwealth Games and I took the medals in and my teacher wanted me to go around to all the other classrooms and show them too,” said Evglevski.

When Evglevski started shooting competitively, after many years of watching his parents compete, he developed a greater appreciation for the sport and the skills it requires.

“As a kid, I didn’t really understand the sport properly,” said Evglevski.

“My parents didn’t explain the technicality to me when I was younger because I think they just wanted me to enjoy the sport.”

By 2018 he was a regular on the senior World Cup circuit competing in Germany, Mexico and Korea and in 2018, he was able to compete alongside his mother at the Commonwealth Games on the Gold Coast.

This was the last of Yauhleuskaya’s Commonwealth Games appearances following a career that lasted 30 years.

“It was an awesome experience, but it felt so comfortable as well because I was so used to having my mum in and around the sport,” said Evglevski. 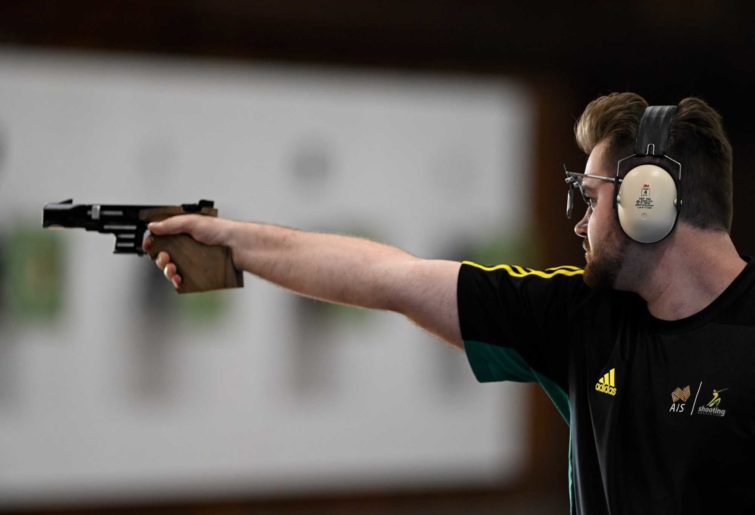 “It was almost like taking a family holiday with my parents.”

Given the longevity of careers in shooting, this is perhaps one of the few sports where parents are able to compete on the international stage alongside their children.

“Even though shooting is less physically demanding than other sports, it is mentally tough,” said Evglevski.

“Because of that the age bracket for physical performance is a lot bigger.”

Even though his mother has retired now, Evglevski is looking ahead to Tokyo and is still very much just at the start of his career. So far, his form leading into the Olympics is pleasing.

Last March during the last Olympic qualifying event held in Sydney, Evglevski equalled his personal best qualifying score of 584. This score would have been enough to reach the top six final in Rio.

“I had a conversation with my coach and we both agree that the standard of my shooting is at a high level, but because of the Christmas break, I need to get back to that level.

“I am focusing on my fitness, getting back into routine and getting rid of some of that rust.”

Unfortunately, the pandemic has posed some challenges. While athletes are flying in from all over the world to participate in the Australian Open, Evglevski has been unable to join his teammates at a month-long training camp at the Brisbane International Shooting Centre.

This camp would have been important preparation for the BISC Cup which is scheduled for January 29-31 and which is also the first selection event for the Junior World Championship to be held in Peru between September 25 and October 10.

“I’m trapped in Victoria for the moment,” said Evglevski.

“The camp does go for a while though so I’m hoping I can get there for at least some of the camp.”