This weekend at Kingscliff, Danielle McKenzie will be one of many women competing in the start of the 2020 Nutri-Grain Ironwoman series.

But being born in New Zealand, growing up McKenzie didn’t even know an opportunity to participate in surf lifesaving at an elite level existed, turning her attention to other sports instead (and cheering on the All Blacks).

“Growing up, through school I played pretty much every sport growing up,” said McKenzie.

“I didn’t play netball because I didn’t like wearing skirts and you had to do that, but I did football, snow skiing and even rugby.

“Although growing up at my primary school, girls didn’t actually play rugby. When I showed up to join the team, I was told that it was not a sport for girls.”

At the time, this surprised McKenzie, especially since she spent most of her mornings before school playing alongside the boys.

But then, McKenzie decided to follow in her dad’s footsteps. McKenzie’s dad was involved in surf lifesaving and he took her down to the local surf club from age seven. McKenzie has fond memories of doing nippers while trying to fit in all her other sporting commitments like playing tennis and water polo.

Despite showing talent in a number of sports, it was triathlon which gave McKenzie her first taste of representing New Zealand on the international stage.

Until that point, McKenzie thought that representing New Zealand would be the highlight of her career.

“When you grow up in New Zealand, representing New Zealand is deemed the absolute pinnacle of your career because there is so much pride in wearing the Silver Fern.

“So I always thought that competing for New Zealand would be the pinnacle of my career.”

But then McKenzie turned her focus to Australia. McKenzie first attempted the Nutri-Grain trial (which you must compete in to compete in the Ironwoman series) was in 2013. Despite her focus being on training with the New Zealand team for an upcoming trip to Tokyo, McKenzie thought the trial would be good practice and improve her skills.

After making the finals of that trial, that was her starting point. The following year, McKenzie returned and she qualified for the Ironwoman series.

“That was my foot into the door,” said McKenzie.

“That was what kicked off my Ironwoman career.” 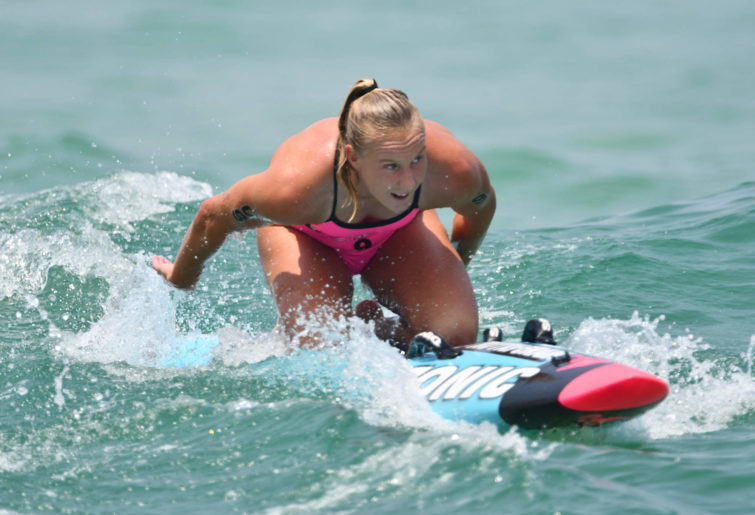 McKenzie is one of just a handful of people from New Zealand to compete in the Ironwoman or Ironman series and she has had success. In 2014 her best result was 11th and she finished 13th overall. In 2015/16, McKenzie placed 13th overall with a highest finish of tenth. In 2016, McKenzie won the ski and the board in the Summer of Surf Series.

2017 was a breakout season for McKenzie, with her best result being a second place. She also achieved a podium place in the Coolangatta Gold in 2017 and again in 2019, becoming the first female New Zealander to ever podium.

Whilst for McKenzie, the goal is always to win, there are a couple of other goals she has set for this Ironwoman series.

“My goal is to be super consistent and not allow those little mistakes in racing to creep in,” said McKenzie.

“If I can make no mistakes in racing and be consistent throughout all my legs, I am definitely going to be super competitive this year.

“I probably don’t have as much top-end speed as I used to. I have to see things in a different way. I am a bit older and a bit more experienced which plays a part.

“The goal is always to win. If you don’t have that in the back of your mind then you aren’t giving yourself the best possible chance.”

Whilst McKenzie’s focus is on surf lifesaving right now, my sense is that the door is certainly not closed on pursuing other sporting pursuits.

When I joke to McKenzie about potentially playing in the NRLW, she tells me that she has tried AFL.

“I played for Bond University but I was not quite good enough to make it consistently into the top team,” said McKenzie.

“I had the fitness, but I didn’t quite have the skills.

“The only reason I could play AFL was because I can kick with both feet, which confused people, but my ball skills are pretty average.