Those who can recall the match tend to remember one key moment.

There was 1.3 seconds left on the clock. Australia’s Yvette Higgins took a shot. It hit the outstretched arm of Bernice Orwig, the goalkeeper for the United States, and struck the back of the net. The crowd went wild. Australia had won.

Naomi Castle was part of that Australian team and recalls almost every moment of that game.

“It was just such a defensive effort and you can tell because of the low score,” says Castle.

“Because there weren’t many goals scored, there wasn’t much rest. It was just up and down and up and down for the entire game. It was so intense and just so loud. You could not hear a single thing in the pool because of the crowd and that was something new for all of us.”

While the gold medal was sealed in the final moments of the game, Castle also scored an important goal with just two minutes to go to give the Aussies the lead for the first time in the match.

“After that goal I knew that we were going to win the game,” she says. “After all that defence we had only let them score two goals in more than three and a half quarters.” 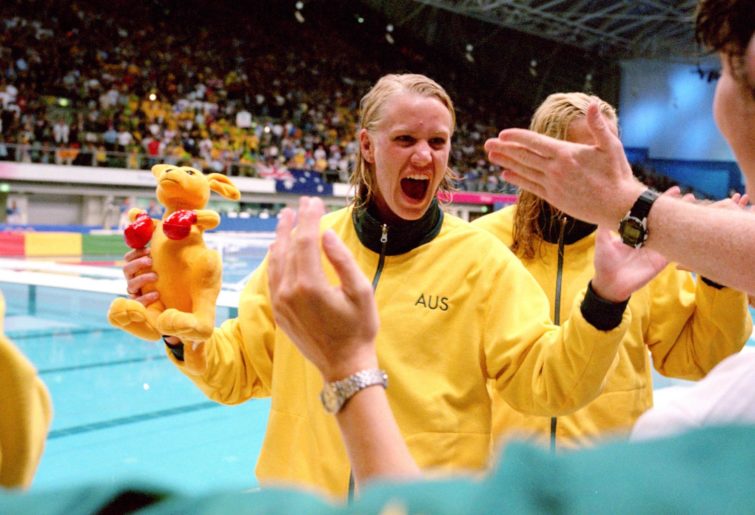 Despite letting in one more goal after that, the Stingers did go on to win that game, and while Castle remembers most of the match, she doesn’t remember as much of what happened next.

“I definitely remember we were racing to make television commitments for the medal ceremony. We were trying to change and get our tracksuits on in time,” she says.

Then it was off to the pub to join their supporters.

That gold medal was a sport-changing moment for water polo in this country. Men and women had been fighting for over 30 years to see women’s water polo included in the Olympic Games.

“There is footage of the final elements of it, where some of my team members turned up to the airport in their swimming costumes in protest,” Castle says.

“But before that we had protests at different events and it was one of those things that people were advocating for for 30 years. Anyone that had an interest in women’s water polo was involved in one way or another.”

It also brought new interest to the sport in Australia.

What has been so special for Castle since winning that medal is the number of people who have shared with her what that moment meant for them.

“I’m surprised by the number of people who still remember that moment of the games, even though before the games they may not have known much about our sport,” she says.

But it also had an impact in terms of the number of people playing water polo in Australia, particularly young women.

For Castle, that is part of the legacy of that gold medal-winning team.

“That was the legacy.”

Plenty has changed for Castle since the Sydney 2000 Olympic Games. She has grown-up children of her own now. But even though it was 20 years ago, she still has very clear memories.

“I remember being aware of what an exciting moment it was coming into the Athlete’s Village,” Castle says.

“We played in the first week and I think we only had one day off in that first week. I had unbelievable nerves for every game except for the gold medal game.

“I remember a lot of detail. It isn’t fuzzy at all. It was such a massive part of my life at that point and what I had been working towards. It wasn’t something I breezed through and took for granted. It is something I still have really fond memories of.”

Tonight the Aussie Stingers are coming together virtually to celebrate that experience. The team and the extended coaching staff are all invited, and for Castle, while the team would rather be in person together, she is grateful for the opportunity for everyone to come together.

“It was such a special moment for all of and I’m looking forward to celebrating that win with the rest of my teammates.”