In early 1980, Surf Life Saving Australia’s National Council held a meeting, which would be remembered for decades to come as fundamentally changing the face of surf lifesaving in Australia forever.

Given that today, 50 per cent of the 21,000 active patrols in New South Wales are women, it’s hard to believe that this July marks just 40 years of formal female involvement in surf lifesaving.

Before this motion was recommended, women were only able to hold back-office functions at Surf Life Saving Clubs.

Although some women had been given the chance to patrol beaches as surf lifesavers during World War II, there was still a misconception that women weren’t physically capable of being surf lifesavers and had the ability to perform rescues in the water.

Rumour has it, that even before the motion was passed and the change made, many women had been secretly training in case the restriction was lifted and from 1 July 1980, the influx of women into surf lifesaving clubs and onto our beaches began.

It took just six days before a group of women from the Illawarra region flew up to Coffs Harbour to be assessed in the warmer water and get their bronze medallions. All these women were successful, and in fact, one of those women, Nella Keenan is still an active surf lifesaver.

Following in the footsteps of these trailblazing women is Courtney Hancock, who is now, Australia’s greatest all-round ocean female athlete. Hancock has achieved all there is to achieve in surf sports, including victories at the Australian Surf Life Saving Championships and Coolangatta Gold as well as several Ironwoman titles.

For Hancock, 40 years of women in Surf Life Saving is an incredible milestone to reflect on.

“When you say 40 years of women in Surf Life Saving, I think ‘how cool is that?’,” says Hancock.

“I feel like it has been so much longer than that. I thought about the number of years I’ve been involved, even as a nipper, it’s been my whole life.”

“It almost feels like women in Surf Life Saving was something that was always there. But when you go back into history it wasn’t always the case.”

This moment in time has allowed women to be more involved in surf lifesaving in a myriad of ways. Whilst women like Hancock have been able to make professional careers out of the sport, there are thousands of women who patrol our beaches and have taken up key roles in the administration of the sport.

“I am so amazed at the numbers of women who volunteer their time who are mothers and have other commitments. They find that time to give a bit of extra time to the sport, to help people,” says Hancock.

“You don’t have to be in the water or be in surf sports to be involved. You can be part of patrol and be valuable as a patrol member without being the person designated to do the rescues in the water.

“There are so many areas in our sport for so many different people to be involved.

Even though women have only formally been involved in the sport for 40 years, the sport has made incredible progress when it comes to diversity. 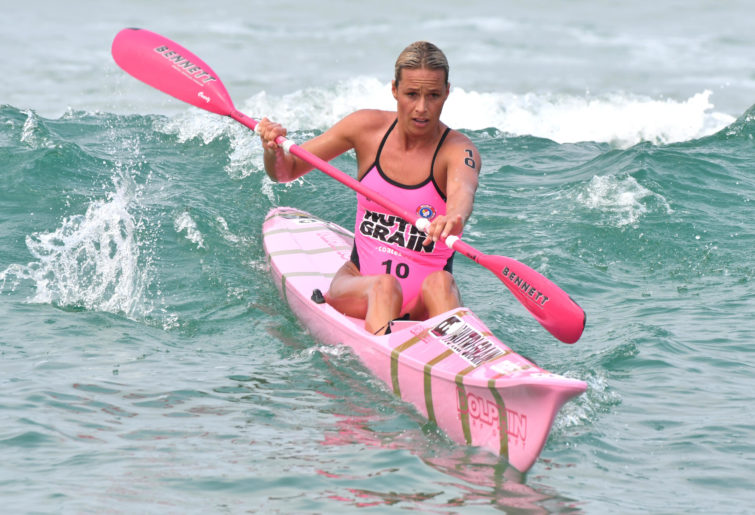 But today, men and women now do the same course at the Coolangatta Gold and for Hancock, this was an event she went on to win three times, the first at just age 21. Now, equality between the sexes is almost taken as a given.

“We race along the men, everyone gets paid the same, we train together. We do it all together,” says Hancock.

“In our sport, we all blend together. At my club at Surfers Paradise, we are all in it together. It is a special community and we are at a great point right now.”

To mark the milestone, Surf Life Saving Australia has announced its Women’s Mentoring Program with 40 women from across Australia to take part.

20 mentors and 20 mentees have been chosen to take part in the program which is about strengthening leadership skills and developing the next generation of female leaders to take Surf Life Saving forward.

“I have so much more to learn and I want to learn,” says Hancock.

“Having a program like this, you feel very supported. Knowing you have that support makes me feel more confident about that point in my career when I retire.”