rowing up, Ashleigh Werner had a dream of representing Australia in the Olympic Games, but you might say that over the years she has had some trouble picking just one sport to compete in.

Throughout her life Werner has participated in plenty of sports, including swimming, athletics, touch football, netball, rugby sevens, rugby union and rugby league, so it might surprise you to learn that she’s currently working towards representing Australia in the 2022 Beijing Winter Olympics in monobob.

“I’m Australian and I was a footy player and I couldn’t see how that would translate to anything or snow or ice. Then one day I just happened to walk into the nation trials for bobsled, I made the team and it was transition time.”

“It just seemed like too good of an opportunity to pass up, and three weeks later I was in Whistler.”

Women’s monobob will make its debut at the 2022 Olympics, so initially Werner competed in women’s bobsleigh. Bobsleigh is traditionally a two-person event and there are two specific roles: brakewoman and pilot.

Werner started her bobsleigh journey as a brakewoman, and in the 2017-18 season her sole focus was qualification for the PyeongChang Winter Olympics. However, after qualifying for the Olympic Games, Werner and her partner, Mikayla Dunn, were subsequently refused nomination. Despite having the support of the Australian Olympic Committee, the duo needed approval from national body Sliding Sports Australia, who at the time cited safety concerns and failures to meet certain AOC-approved performance criteria. 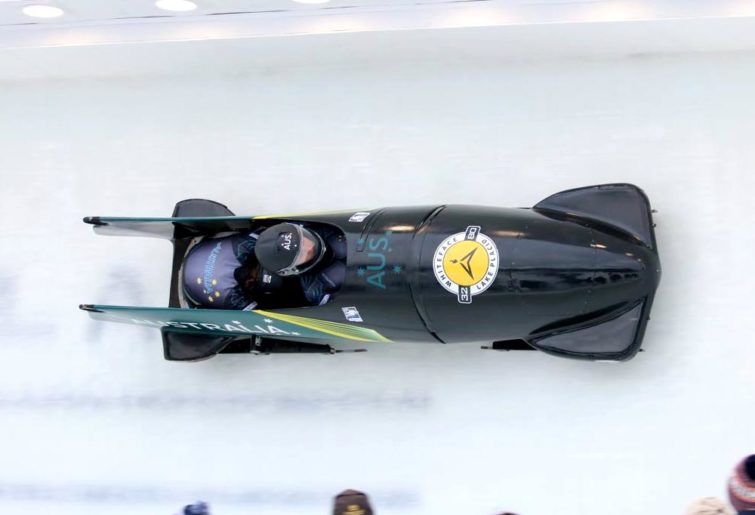 “It was really disappointing. We had our Olympic ID badges and our passes to get into the village and then we got told we weren’t going. For an athlete that’s the worst words you can ever hear.

“But at the end of the day it separates those who want it badly enough from those who don’t. I am a stronger athlete now and in a better position than I was back then. I’m not hungry anymore, I’m starving.”

After the disappointment of missing the Olympic Games, Werner was at a crossroads. She was unsure of whether to go back to one of her other sports or whether to continue with bobsleigh.

Then her coach encouraged her to transition from brakewoman to driver. That proved to be a major turning point.

But when first invited by her coach to do a pilot course at Lake Placid, Werner’s first response was: “No, absolutely not. I think I would be a terrible driver. No, can’t do it.”

But Werner decided to attend the course and made a commitment that if she didn’t like it, she would walk away from the sport.

After Werner’s first day at the course she was hooked, and she has since become a successful pilot. In her first season her team finished second overall on the North American Cup Circuit and secured 22nd place on the world rankings.

The introduction of monobob for the next Olympics presented Werner with a new opportunity as well as many other athletes across the world.

Traditionally bobsleigh is a sport dominated by the ‘wealthy’ countries, and by ‘wealthy’ I mean countries that have snow and tracks to practice on. But monobob turns this model on its head.

“Monobob is a great opportunity for smaller nations because every nation has to buy the same sled but can use different runners,” says Werner.

“Traditionally in the sport there has been a big divide between developing nations and countries like Germany, Switzerland, Canada and the US that dominate the sport because they have the funding to afford new technology.

“We always say bobsleigh is one-third push, one-third driving and one-third sled, so if you don’t have the sled technology, it makes it hard to compete.”

With a standardised platform for each athlete, the monobob playing field is levelled, which makes the contest fascinating ahead of the upcoming Olympics.

Looking ahead, Werner is feeling optimistic for 2022. There was a change in the Sliding Sport Federation just before this season commenced, and the body is now committed to ensuring the athletes are prepared for the challenges ahead.

But who knows what lies ahead for Werner beyond 2022. She certainly hasn’t ruled out returning to one of her former sports.

“I miss playing rugby league. I really, really do. But it might not be over yet, it might just be over for the moment. I can’t see myself staying away forever,” says Werner.

So, footy fans, watch out.