Lucy Lockhart was a child who loved playing sport.

She grew up in a large family, so learnt how to be competitive early as well, competing with her siblings to get to the dinner table first in the evening.

Her first sport was rugby league which she played alongside her twin brother from the age of six. Like many other women of her generation, from age 11, Lockhart was no longer allowed to play with the boys. So she tried a different spot.

“I tried netball, which was a big change,” said Lockhart.

“But it was hard because I kept getting in trouble for contact.”

“It was suggested that I take up another sport because I kept shoulder charging other women on the field.”

Lockhart decided that perhaps non-contact sports were not the right fit for her, so she started playing softball.

Despite softball not technically being a contact sport, Lockhart enjoyed batting and sliding. In fact, Lockhart tells me that she had more grazes on her knees from playing softball than any other sport. Lockhart ended up representing Queensland in softball in 2012. 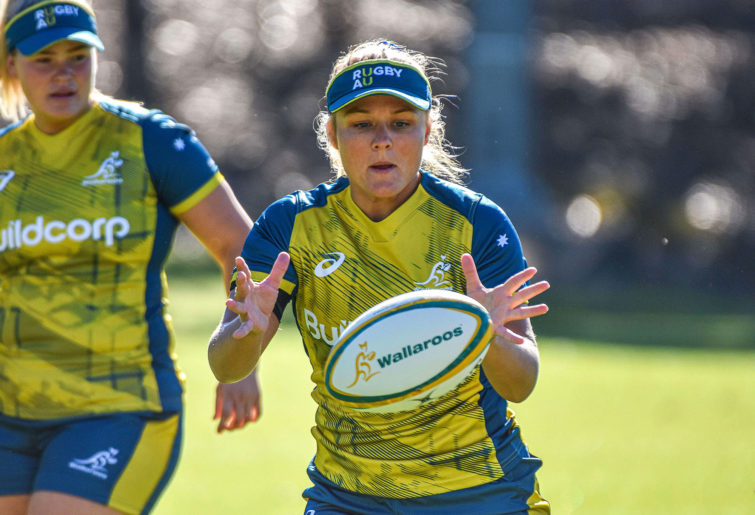 At age 17 Lockhart joined the army and as part of the Australian Defence Force had the opportunity to play rugby for the first time. Lockhart had found her new game.

For many female athletes, the ADF proves to be a supportive employer while they are juggling their career and their commitment to sport. Lockhart certainly had this experience.

“The support from the ADF has been incredible,” she says.

“So many other women had to go away to camps and take unpaid leave. This is so hard.

“But when you are in the ADF you have an annual salary, you get the time off and you are released from your duties to be able to go to camp.”

During her time in the ADF, Lockhart had a difficult decision to make. Lockhart’s first sport may have been rugby league, and she was given an opportunity to represent Australia as part of the Jillaroos in a game against Papua New Guinea in 2017, Lockhart made a decision to stick with rugby.

“Because I had been playing rugby union for so long, I really had a love for the sport,” she says.

“I belong in rugby union and I have really found my niche.”

So committed is Lockhart to being selected as part of the Australian Wallaroos squad to play in next year’s Rugby World Cup, that she made the decision to move to England a couple of years ago to play rugby.

“England has a semi-professional rugby union competition which is outstanding,” Lockhart says.

“You get paid to play the sport you love and the standard is very good, so people come from all over the world to play rugby in that tournament.”

Lockhart credits her time in England for helping her develop her skills and giving her the opportunity to compete at a higher level.

Due to COVID-19, Lockhart returned to Australia last year, but in her view, it was a blessing in disguise.

Lockhart had been experiencing challenges with her shoulder. It kept popping out while she was playing rugby. The solution was to keep strapping it in until Lockhart had a conversation with her physio at the end of last year to see if it would be possible, timing wise, to have a shoulder reconstruction and still be in the running to be selected for the Rugby World Cup (at that point due to take place in 2021).

“Now that the Rugby World Cup has been pushed back, it gives me more time to fix the nooks and crannies of my injury,” said Lockhart.

“It gives me more time to get it to 100 per cent before I go out and push to reach my potential on the field.”

Last week in the first Wallaroos camp for the year in Canberra, Lockhart returned to full contact with one focus; to make the Wallaroos squad for the Rugby World Cup.

“It’s lucky that I came back early because I have had the chance to get selected into the squad, the whole experience has been a blessing in disguise,” said Lockhart.

Just like the rest of her teammates, Lockhart is excited to just be playing rugby again. While there were some nerves returning to full contact, Lockhart has felt completely supported by her physio and her teammates.

“Our physio Kylie has been exceptional and some of the other women were doing some basic drills with me to help me get my confidence up,” said Lockhart.

“Everyone wants me to return to the playing field and it’s special to get the chance to play alongside a squad of such talented and humble women.”