This week there have been plenty of questions asked about Australian rugby.

Who will succeed Bill Pulver as chief executive of the Australian Rugby Union after announcing that he would step down from his role after axing the Western Force from the Super Rugby competition? What will happen to the Western Force? Does Super Rugby have a sustainable future in Australia?

As a person who identifies mainly with rugby league and cricket, the answers to these questions don’t concern me too much.

The question I would like to hear the answer to is what the ARU plan to do to make sure plenty of lessons are learned from the Australian Wallaroos current campaign in the Women’s Rugby World Cup in Ireland.

Heading over, I knew this would be a difficult tournament for the Wallaroos.

Despite the team having the opportunity to travel to New Zealand and compete in a Tri-Nations tournament earlier this year and then go into team camp before departing, making the squad the best prepared that they have ever been heading into a World Cup, I didn’t think it would be enough – particularly against teams like France and New Zealand.

Last Friday morning, the Wallaroos suffered their first loss of the tournament. They were defeated by Ireland by the narrow margin of just two points.

But, there were plenty of positives for the team following the 19-17 defeat.

Shannon Parry showed why she is the most well-recognised woman in Australian rugby. A Wallaroo and an Olympic gold medallist, her experience showed throughout this game.

It really was an inspirational performance by the captain.

The back row of Parry, Grace Hamilton and Mollie Gray were also in fine form – particularly considering how new that combination was. Parry had only just returned to the Wallaroos and Gray had been out injured for most of the year, having done her MCL and ACL in Brisbane at the start of the year.

There is plenty of opportunity for this back row to improve and be real leaders in the squad.

There was also some risk bringing in a new halves combination, but both Katrina Barker and Trilleen Pomare were outstanding. Trilleen made her Test debut in this game.

Line-outs and goal kicking were two areas I identified as needing some improvement, but the Wallaroos performance gave me plenty of hope heading into the game against France – particularly given that had two easier conversions been made, the Wallaroos would have won this game.

But then, my hopes were dashed as the Wallaroos went down 48-0 to France.

It certainly wasn’t the Wallaroos best performance, but the reality is they were outclassed by a better team and it showed that, if the Wallaroos want to compete at this level, some things really have to change.

Don’t get me wrong – this article is not having a crack at the women in the team. I support every single woman in that team and want to see them continue to go from strength to strength.

Every time I have watched this team play they have played with courage, commitment and resilience. The women in this team love their rugby and plenty of them juggle work, families, university and work while juggling rugby on the side.

Each time they play together they improve and I always get glimpses of what this team could be if they were properly invested in.

A couple of weeks ago, Josephine Sukkar said the Wallaroos could win a World Cup in four years’ time if they were invested in, just like the sevens program has been.

The key word there is investment. 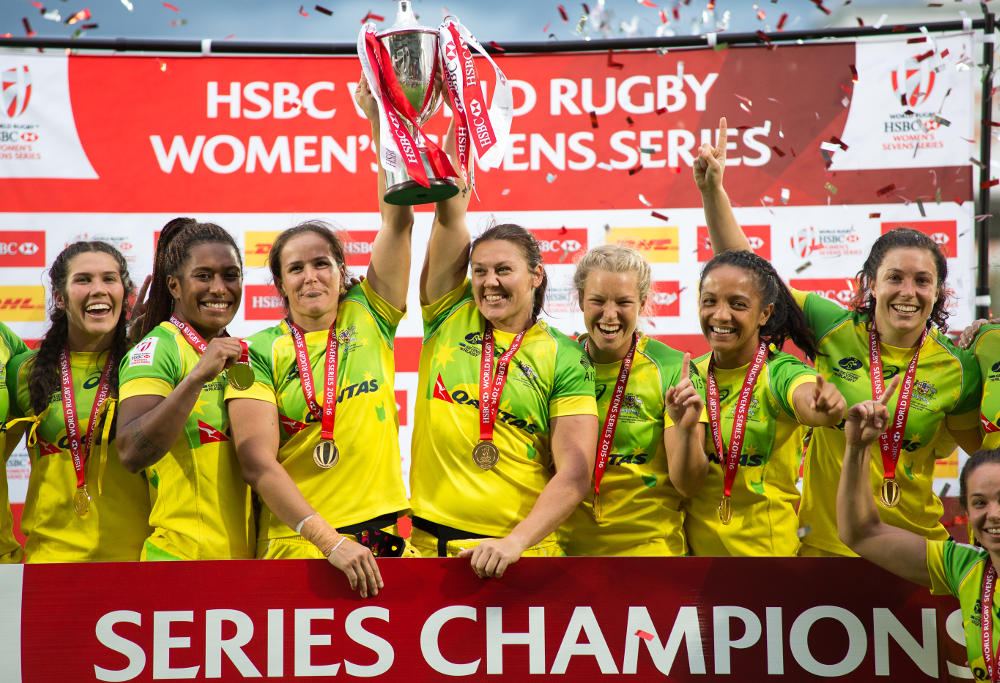 Can Australia’s success in Women’s Rugby Sevens be matched in the XV’s? (ARU Media)

It is unfair for us, as the Australian public, to expect the Wallaroos to compete against the top rugby nations in the world, given the women in the squad are not professionals and, until this year, have been given very little opportunity to play together on a consistent basis.

This space is an interesting one at the moment with the English Rugby Football Union having recently decided not to continue their XV’s women’s player’s contracts and the situation in New Zealand where the sevens players are contracted, but not the XV players.

So the way I’m looking at it, a decision really needs to be made by the Australian rugby union.

Given the joy last year’s gold medal win gave the nation and the boost that gave women’s participation in rugby, I would think there is enough money in the coffers to be competitive in both and that it would be worthwhile.

So let’s start working toward four years’ time and seeing a big investment and improvement for the Wallaroos.

But before we get there, the Wallaroos have one more game in this World Cup campaign against Japan this morning.

The Wallaroos finished seventh the last time they competed at a World Cup. The goal should be to finish slightly higher. A win against Japan is the first step toward making that a reality.

Athletics
I had to make mention of Sally Pearson who last week became a World Champion again, clocking 12.59 to win gold at the 2017 IAAF World Championships in London.

Sally is one of my favourite comeback stories in sport.

This is a woman who has already won one other world title, two Commonwealth Games gold medals and has been crowned an Olympic champion.

But her success has not come without its setbacks.

Sally’s inclusion in this competition marked her return from several serious injuries that forced her to withdraw from the world titles in 2015 and the 2016 Olympic Games in Rio.

Is it too early to start dreaming about Tokyo?