Sophie Day was a latecomer to cricket.

After playing hockey for many years growing up, Day decided to put down the hockey stick as she approached her final years of school. Her mum was insistent that she continue to play some sport while she studied, so Day decided to take up cricket.

“Maybe I picked cricket because it lasted the whole day and it meant I didn’t have to study as hard,” says Day.

But her dad – who Day insists is the best cricketer in her family – was also a big influence. Day’s dad Cameron played at the local club and she decided to follow him there.

Day began her cricketing career in what was a father-son team at Warrandyte Cricket Club. But of course with Sophie joining her father Cameron in that team it also became a father-daughter team.

She has fond memories of playing alongside her dad, who is also recognised as a legend at the club. There was even an opportunity to play alongside her grandfather too.

“I love it down there. The boys and men at that club were so welcoming toward me and that was where it all began for me,” Day says.

“It was so special to play alongside my dad. The club has been really supportive of girls and they are now starting a have a couple of women’s sides too.” 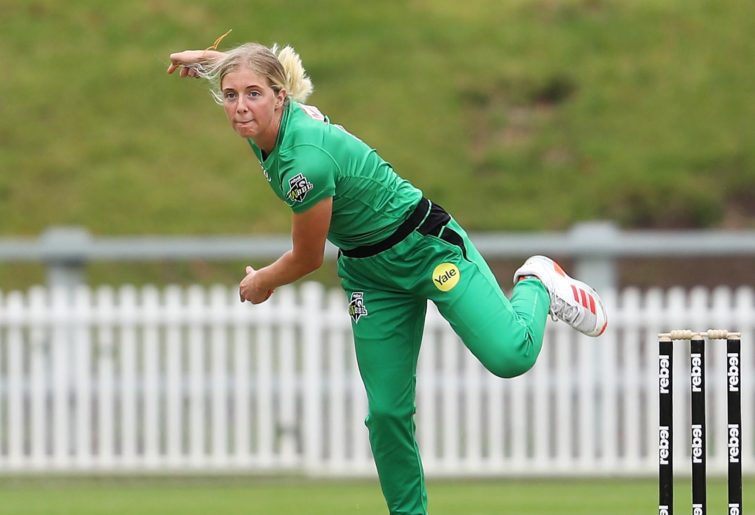 Given Day came to cricket a little bit later, she is part of the next generation of cricketers who grew up with female cricketers to idolise.

After securing her first WBBL contract this year with the Melbourne Stars, coming into a hub with so many players that she grew up idolising has been a really special experience for Day. Although she is finding them hard to recognise when they are wearing casual clothes.

When it comes to her Stars teammates in particular, Day has spent many years watching their progress.

“I look up to every single one of them,” she says. “I looked up to them even before I was in this set up so to play alongside them now is incredible.

“You go from watching these women on television and wishing you could play alongside them, and then to actually be able to run out alongside them is surreal.”

There is plenty of experience in the Stars line-up for Day to listen and learn from.

Meg Lanning has returned to captain the club this year and joins the likes of Natalie Sciver, Katherine Brunt Mignon du Preez and Elyse Villani. In terms of squads with collective international experience, the Stars would be close to the top of the list in the WBBL.

Day is taking her opportunity in the WBBL watch and to learn from these players.

In the seven-wicket Stars win over the Strikers Lanning scored 69 off 58 balls.

“It was absolutely incredible to watch. Some of the shots she was playing were insane,” says Day “She leads by example, knows her game and knows how to get the win. She is also really calm.

“You learn so much from just watching her.”

Day also has a close relationship with Villani, who was the one who presented Day with her cap in the lead up to the Stars first game.

“Elyse said some really nice words and it meant the world to me and my family.”

“They got to watch what she said, and even though she couldn’t be there, it was filmed and they got to hear those words.

“She was so kind and I really look up to Junior. She has helped me so much through this period with advice and pointers, so for her to give me my cap meant the world to me.”

Given the rainy weather Sydney has experienced, it took until the Stars third game this season for Day to have an opportunity to bowl.

“It did take a while,” says Day. “It got me a bit nervous waiting around, but it was great to finally get a bowl. When it started to rain I worried, but fortunately we got the game in.”

But as she worked her way through the ranks she has found she is playing more as a bowler.

While it is a role change, Day is happy with her current spot in the Stars batting order.

“When you have people up the order like Meg Lanning and Elyse Villani, it is pretty incredible. I am happy for them to go out and bat.”