Unfortunately, the Sydney Sixers’ opening four games in the WBBL have all been impacted by rain.

With two games completely abandoned without a ball being bowled and the remaining two being decided by the Duckworth Lewis system, it’s been a frustrating beginning to the tournament.

Despite this, after the weekend’s fixtures, the Sixers were second on the WBBL leader board behind cross-town rivals the Sydney Thunder after winning both games they have managed to get on the field for.

From those two games, there have also been some positive signs not just for the Sixers’ more senior players, but also for the up-and-comers in their squad.

In the win against the Melbourne Renegades, Alyssa Healy was named player of the match after scoring 60 runs off just 31 balls in an incredible innings that included 11 fours and one six. With her 27 runs against the Adelaide Strikers after four potential games, Healy sits second on the runs leader board, just two runs behind Heather Knight from the Thunder.

Stella Campbell also had a day to remember against the Renegades.

At just 18 years old, the speedster took 3-34 off four overs including the wickets of Amy Satterthwaite and Erin Fazackerley.

The wicket of Satterthwaite was a particularly memorable one, given that 17-year-old teammate Hayley Silver-Holmes took an impressive catch, albeit after a bit of juggling. The jury is still out as to whether the juggling was for suspense.

“I was so shocked by it. It was pretty good hand-eye coordination in the end to pick it up,” said Campbell.

“It was a really good reflex catch and she is very clever to be able to pick that up after knocking it off her chest.”

That three-wicket haul propelled Campbell to equal second on the wickets leader board behind Sarah Coyte from the Adelaide Strikers, and capped off a very busy week for Campbell. 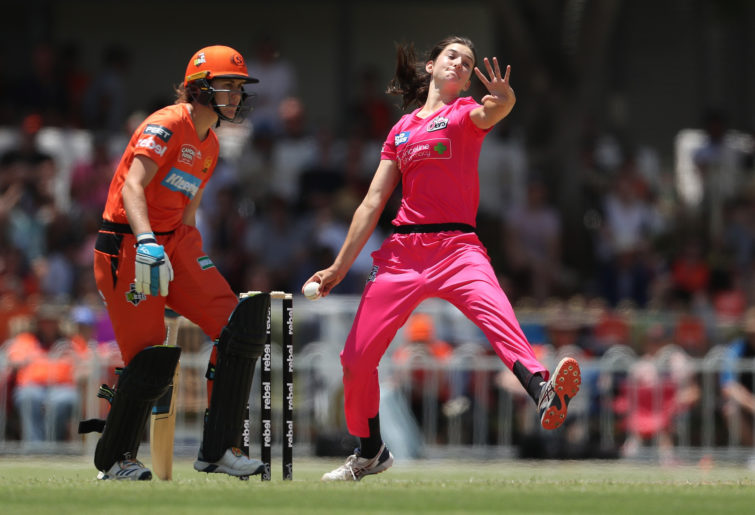 Just like four other players in the WBBL village, Campbell has spent the last couple of weeks juggling cricket and completing Year 12. Those Year 12 students are part of a much larger crew in the WBBL village who are still finishing up their school exams.

This group of up-and-comers is testament to the importance of the WBBL and the opportunity it gives players to not only play consistent T20 cricket, but also compete against some of the most talented female cricketers from across the world.

Campbell finished her last exam on Monday with a great sense of relief.

“I woke up [on Tuesday morning] just relieved and so excited to get out into the village and chat to everyone and get involved in all the activity,” said Campbell.

Given just how much is happening in the village, including the golf simulator, table tennis table and players from not just across Australia but also the world, there were plenty of potential distractions while Campbell was doing her exams.

“It was a little bit hard seeing everyone getting involved in everything and having a lot of fun while I was in my room studying,” said Campbell.

“But it was only a really short period of time that I had to put my head down and get into the books and I knew I would be able to enjoy all the fun when my exams were over.”

Not only did Campbell have to contend with cricket and doing HSC exams, but she was also in the midst of an important election campaign.

While the world may be talking about the upcoming US election between Donald Trump and Joseph Biden, the talk of the WBBL village was the election for village mayor.

Campbell was one of eight players in the running to be elected mayor alongside others including Molly Strano, Alex Price and Phoebe Litchfield.

“I was thrust into that campaign at the end of it. All the players got on the bandwagon of voting for me, which was quite funny in the end,” said Campbell.

“I didn’t have much say in it but I just went with it and I daresay there was a bit of relief when my name wasn’t called.

“It was a fun experience over the 24-hour period.”

After a very intense day of voting, the honour was bestowed on Bhavi Devchand from the Melbourne Stars.

At this stage, all the benefits of being elected village mayor are still unknown, but Devchand did have to attend a very important ribbon-cutting ceremony this week.

The golf simulator has mysteriously been out of action for the last few days, so Devchand had the honour of reopening it. No doubt some players will be wary of that simulator given that Grace Harris is still nursing a black eye after an unfortunate incident while using the simulator.

There is still no word on whether Devchand will be successful in getting a village puppy for the squads to look after.