Words matter, and this week, Australian cricketer James Faulkner was reminded of just how visible his words are.

On Monday evening, Faulkner shared a post on Instagram where he was photographed with his mum and what has subsequently been revealed to be his roommate.

The caption when it was first shared featured a reference to his “boyfriend” and – for good measure – Faulkner added some love heart emojis in there too.

We know what happened next. Some parts of the media saw the post, made an assumption that this was Faulkner coming out as a gay man, and ran the subsequent.

It was later revealed that it was a misunderstanding of how he used his words, the all-rounder making a statement acknowledging this and praising the support that his post received.

Let’s start with the media. Some people have accused the journalists that ran this story as not doing their jobs correctly by not checking the facts or confirming the post with another source.

But it did appear clearcut – Faulkner referred to his “boyfriend” and that they had been “together” for five years.

There have been suggestions of double standards, given that women often refer to their female friends as ‘girlfriends’. This is true, but the two situations are not the same.

Words are often given meaning depending on how they are used. I hear females use the word ‘girlfriend’ regularly to describe their relationships with their friends. I rarely hear this word used in the same context by men – the words ‘mate’ and ‘bromance’ are far more common.

The word boyfriend, coupled with the hashtag, looked like a reference to a couple and any journalist that made that jump, did so with reasonable basis (particularly given the number of players, teammates and media personalities who congratulated Faulkner on his ‘bravery’).

This fiasco also reveals just how relevant social media is in the news.

A social media feed is meant to be an insight into the individual, and tweets and photos are often embedded into stories. I wonder how often photos and tweets are verified before inclusion or whether they are often taken at face value.

Perhaps the media did pick this up and run with it quickly, but perhaps the reason is that many Aussies are waiting for a male athlete to identify as gay.

There are very few (if any) professional male athletes who identify as LGBTIQ. Had this story been legitimate, it would have been a watershed moment in Australian sport.

This is an area where the women’s game is miles ahead. Women’s sport celebrates our athletes on and off the field – diversity and inclusivity is something we hold dear. I look forward to a day when men feel as comfortable to be who they are as the female athletes which so many of us idolise.

Please don’t confuse this story with outrage, because I’m not outraged. I am just disappointed that Faulkner lacked the self-awareness to see how many would interpret his post. Our athletes often say they don’t read media or words written about them; perhaps this contributes to a situation where they fail to understand the impact of their words. 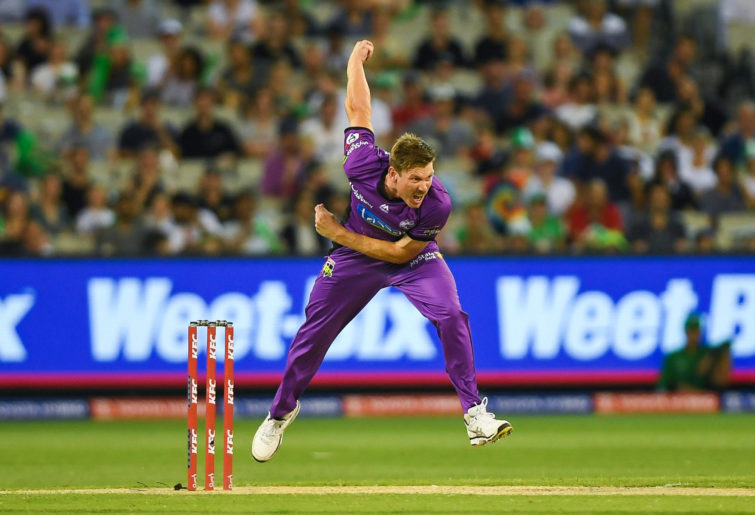 James Faulkner (Photo by Morgan Hancock/Action Plus via Getty Images)

Many will argue that this is just another example of political correctness gone mad. Apparently, we live in a world where people can barely say anything at all, lest someone is offended. But just because something doesn’t offend you or may seem trivial to you, does not mean it is trivial for everyone.

My question to the people making this argument is: if you think it was a joke, how it was funny? Even if it was a little bit funny, I’d be keen to understand what about it was.

Even Faulkner is not suggesting it is a joke, merely that that is the way he refers to people, which I find hard to believe.

Over the last couple of weeks, there have been plenty of discussions about the LGBTIQ community, particularly in the wake of comments made on social media by Israel Folau.

Our words matter. Let’s try and show empathy for the people around us and consider how they feel before making a joke that may get us a giggle, but then result in a lot of hurt for other people.

The statistics I’ve shared from the Black Dog Institute above make me deeply uncomfortable and sad. I wonder how much throwaway lines, jokes and moments like this contribute to those statistics.

Perhaps, for a moment, Faulkner forgot how many people he reaches with his posts and how much influence he has. It’s unlikely he will forget again.