Coming into AFLW season four, the Adelaide Crows were the hunted. After winning their second title in just three years in 2019, the club had certainly proven themselves as one of the most dominant teams in the competition.

However, after a couple of injuries sustained during the off-season, including to star midfielder Erin Phillips as well as Chloe Scheer and Deni Varnhagen, some doubt was cast over the squad’s ability to go back to back, particularly after their shock loss to the Brisbane Lions in Round 1.

Since then, the Crows have managed to get their season back on track with strong wins against St Kilda and Geelong. One player that was thrilled with the win over the Cats was Anne Hatchard.

“It was a really physical game so we were really pleased to get over the line,” Hatchard said.

“It was probably one of the most physical and highly skilled games I have played in in my footy career.”

Hatchard was crucial to the Crows’ title success last year. Season 2019 was a breakout year for Hatchard, who earned her first All Australian selection and finished equal third in Adelaide’s best and fairest award. 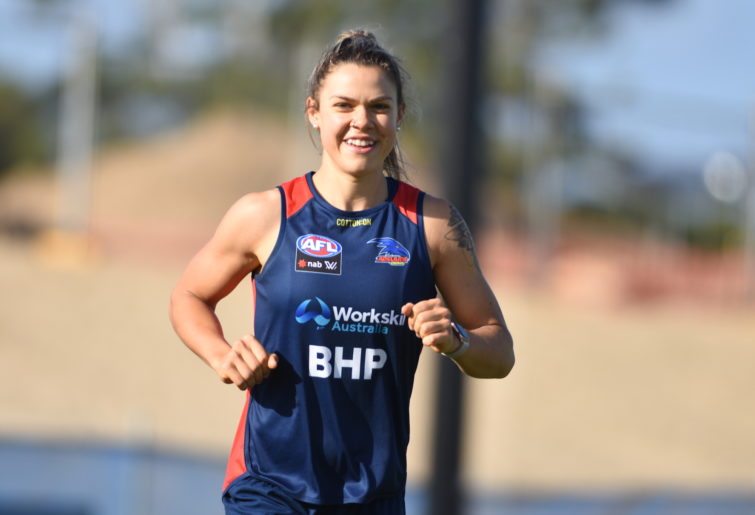 So why the change?

Hatchard credits her breakout year to a change she made in the off-season leading into season three of the AFLW. During season two, Hatchard admits that she was unfit and a bit bigger. This led to some personal concerns about whether she would get another contract.

So Hatchard took matters into her own hands.

“During the off-season after season two, I worked really hard to change my diet and fitness and I came back for pre-season and everyone was a bit shocked,” says Hatchard.

“My body transformed and I got much fitter.”

As a result of this change, Hatchard changed positions too. After spending the first two seasons of the AFLW playing as a defender, she moved into the midfield because she was able to run further and faster.

The move paid off last year, but is also creating headlines this year.

Earlier this year against the Brisbane Lions, Hatchard finished the game with 34 disposals, eclipsing the previous record set by her teammate Ebony Marinoff last year.

But for Hatchard, the change in her diet hasn’t just led to improvements in fitness.

“I think it has helped with my mental health as well. I have become a much happier person and I’m really enjoying my sport,” says Hatchard.

“In season one and two I was enjoying it, but I didn’t realise how much more I could enjoy my footy and I am now because I’m fitter.”

Hatchard has also learnt the importance of balance.

“It is so important to get the on- and off-field stuff right so you can get the best out of yourself, not just on the footy field but in all elements of your life. If you aren’t happy on the field, it will show on the field,” says Hatchard.

“It is so great right now to be healthy, both physically and mentally.”

The reality for so many AFLW players is that they juggle more than just their footy. For Hatchard, not only is she playing footy, but she also works for the Adelaide Crows in the community team. Before the season started, she was working five days, but she has cut down now so she can better juggle her footy commitments. 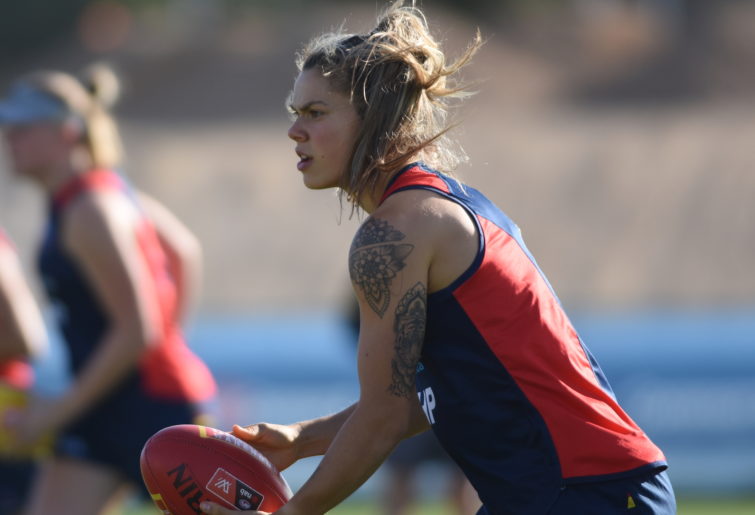 But working with the club and particularly in the community program has reinforced to Hatchard the importance of the AFLW and the impact it is having on the next generation of young men and women.

“I never would have thought growing up that I would be playing for the Crows and being able to inspire all these kids,” says Hatchard.

“It is so humbling. It is just incredible that I am a role model for some of these kids and that they watch you and want to be like you. It’s really crazy how far it has come and how much AFLW is impacting the next generation.”

Not only has the club given her this perspective, the chance to play footy and a job, but it also gave Hatchard a taste of an elite environment, which pushed her towards making changes to her diet.

“Being young and inexperienced, I didn’t have elite standards and I didn’t know what to do. I had a lot of habits that weren’t great, but growing up and maturing, I learnt a lot along the way about what I needed to do to become an elite athlete,” says Hatchard.

“Having people like Erin Phillips and Chelsea Randall around has also been a massive help. They are great role models and along the way have shown me what I need to do and how I needed to change. I had a lot of support from the club, which was awesome.”

But despite the improvement to all aspects of her life, what’s the one thing that Hatchard misses?

“Growing up I was a big KFC eater,” she recalls. “I loved it. It’s delicious. Now I drive past with the windows down and have a bit of a sniff. That’s as far as I can go now.”