ome people hold the view that sport and politics should not mix. In my view, the two cannot be separated.

Human beings participate in sport and human beings, by nature, are inherently political.

By ‘politics’ I don’t mean the shenanigans that happen in Canberra each week, but more the role sport can play in starting or facilitating a conversation about important social issues.

Traditionally, the NRL has not been shy in stepping into challenging conversations and using the game’s powerful voice to start a dialogue about issues. In fact, it is one of my favourite things about the game.

Sport has an incredible power to bring people together, which makes it a powerful tool in making our world a better place.

Examples of the NRL playing in this space include when Macklemore performed ‘Same Love’ at the 2017 grand final during the debate over marriage equality, the discussion about why some parts of the Australian national anthem are troubling for Aboriginal people, and the NRL’s commitment to the ‘no-fault stand-down policy’, being the first Australian sport to introduce a policy of this nature. 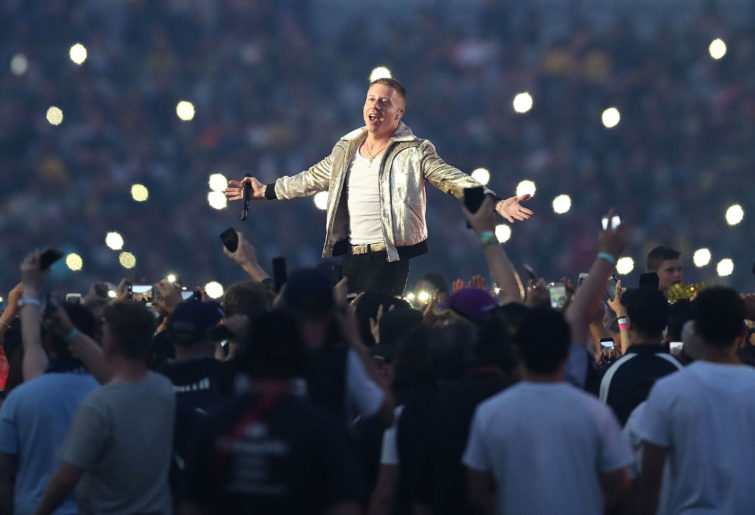 Macklemore performs prior to the 2017 NRL grand final. (Photo by Mark Metcalfe/Getty Images)

We have seen another example of the NRL showing leadership in the last week, being the first sporting code in the country to release a video encouraging Australians to get vaccinated.

The campaign features representatives from many of our clubs including Adam O’Brien from the Newcastle Knights, Kennedy Cherrington from the Parramatta Eels and Nathan Cleary from the Penrith Panthers.

There is a broad spectrum of ages and nationalities involved, all encouraging people across the country to get vaccinated. This representation is important, particularly given the vaccine hesitancy in communities with a high representation of people from Pasifika backgrounds.

Importantly, the campaign is supported by important work being done by Canterbury and South Sydney (which makes sense given these clubs represent areas of Sydney where the impact of the pandemic is being most keenly felt).

The Bulldogs have been assisting NSW Health to deliver messaging to a fan-base which is culturally diverse, while Souths’ links to Indigenous communities has them also playing an important role.

Dean Widders, who will be coaching Parramatta’s NRLW team, is also speaking directly to Indigenous communities, encouraging people to get vaccinated.

I am incredibly proud of the game committing to this message and playing its role in helping our country get back to a state of normalcy. Vaccination is the only way to do this.

But while the NRL may have put up a united front on this issue, behind the scenes the position will not be as unified.

No doubt there will be players who are hesitant and unsure about getting vaccinated, just as members of the public are. This will no doubt play out over the next couple of months as different sports put forward their position on player involvement being dependent on full vaccination.

The NRL does not yet have a position on this but it may be waiting for the Government to make a determination or waiting to see how other sports handle the challenge.

Decisions around vaccination won’t just impact players. It will also impact those of us who want to attend live events in 2022.

Earlier this week, the Sydney Roosters became the first sporting club in Australia to announce plans to ban unvaccinated fans from attending home games next season.

“We want members and fans to feel safe about coming to the football and knowing the people they are sitting next to have been fully vaccinated,” chairman Nick Politis told the Daily Telegraph.

“It might upset a minority of supporters but it’s the only way forward.

“We think all NRL clubs need to take a responsible stand on this like they are doing overseas.”

No doubt this will impact clubs differently. The Roosters represent parts of Sydney with much higher vaccination rates. Will the likes of the Bulldogs, Eels and Rabbitohs be willing to make a similar commitment?

The challenges of the pandemic continue to stay with us and sport clearly has a role to play in bringing us back together again.

But sport has a number of hurdles to overcome to work out what coming together in a safe way looks like for players, officials and spectators.