In the not too distant past you were hard-pressed to find any women’s sport events to attend.

We now live in a world where not only can we go and watch women’s sport, and not only is it broadcast, but it just so happens that more than one sport is taking place at once.

First stop is Leichhardt Oval at 1:15pm for the NRLW game between the St George Illawarra Dragons and the Sydney Roosters, the competition’s second standalone clash following last weekend’s match between the Warriors and the Dragons at Mt Smart Stadium.

Heading into the final round of the NRLW, the competition is still well and truly alive with all four teams able to make the decider.

The undefeated Broncos and the Dragons, thanks to their big win in New Zealand last weekend, are in the box seats to make the grand final, but if results go their way, the Roosters could also make it with a win on Sunday. The Warriors are also alive.

There’s more than just a spot in the grand final at stake too. With the World Nines and an Australian Jillaroos Test against the Kiwi Ferns in October, many of these women will also by vying for green and gold jerseys.

There are a couple of changes for both teams. Stephanie Mooka returns for the Dragons and Aaliyah Fasavalu-Fa’amausili comes in for Kimiora Nati, who will miss the game due to illness.

For the Roosters, Simaima Taufa, Shontelle Stowers, Rebecca Young and Simone Smith have been left out of the 17, with Bobbi Law, Jasmin Allende and Quincy Dodd set to make their NRLW debuts.

In terms of the key player match-up, who to choose? Almost every single player that lined up for the NSW Blues in State of Origin will compete in this game, but I can’t go past the clash between Jess Sergis and Isabelle Kelly, two of the most exceptional attacking players in the NRLW.

This is a great opportunity for women’s rugby league fans to vote with their feet and show their support for the competition.

To date almost all of the NRLW games have been played as double-headers prior to the men’s game – and for good reason, including broadcast and visibility. But as the standalone State of Origin at North Sydney Oval showed, there’s plenty of appetite for the women’s game. 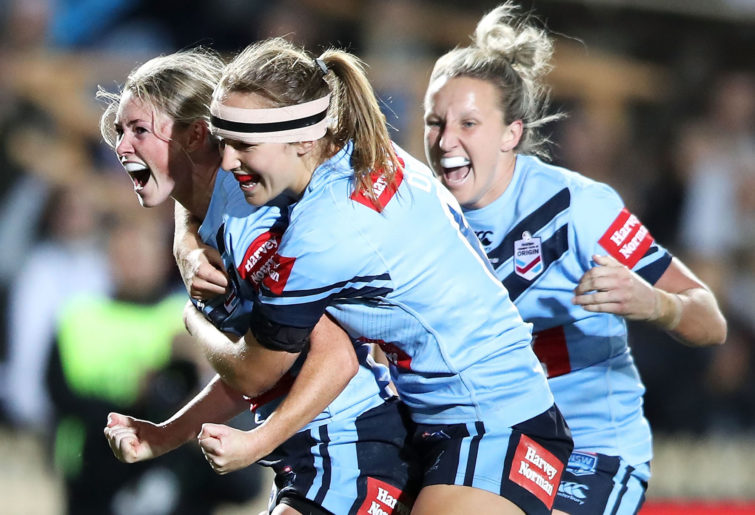 Speaking of North Sydney Oval, that’s where the Australian international summer will begin for the Australian women’s cricket team with a home series against Sri Lanka ahead of the WBBL, which starts in October.

This is the first time since March that the Aussie women have had the chance to play in front of a home crowd, and after travelling through the UK for the Ashes then the Caribbean, the team will be happy to be home.

The Aussie women have just returned from a very successful tour against the West Indies and will be looking to continue that positive form against Sri Lanka.

The same group of players that toured the Caribbean will play in the T20 part of the tournament, with all three games to take place in Sydney. A squad of 13 players, with Erin Burns the member of the T20 squad to miss out, will then head north to Brisbane’s Allan Border Field for the 50-over portion of the tour.

In the ODIs, ICC Women’s Championship points will be up for grabs. Australia currently sits at the top of the ladder after leapfrogging England following that tour of the West Indies.

There are a couple of things to keep an eye on with this tour, particularly the T20 leg.

With the ICC Women’s World Cup in February looming, coach Matthew Mott has indicated that he will tinker with some elements of the team’s game to get the formula right. The announcement of the squad showed that Mott didn’t necessarily mean changes to the players, but rather a change to the way they are playing.

Key to that will be the batting order, which is always a challenge considering the talent at Mott’s disposal, including the likes of Alyssa Healy, Meg Lanning, Ashleigh Gardner and Rachael Haynes.

A player to watch is Heather Graham, who has been selected in both teams and is eying off her debut on home soil.

Sophie Molineux remains unavailable through injury and Nicole Bolton continues to take time away from the international game to focus on her mental health.

For lovers of women’s sport, there’s plenty on at the moment, so whether you get to Leichhardt Oval or North Sydney Oval, you’ll be watching some future Aussie superstars in action.