It certainly is an exciting time for women’s rugby league – and I don’t just mean here in Australia.

Two weeks ago the eight teams who will be contesting the Women’s Rugby League World Cup in the United Kingdom in 2021 were announced.

Later that week, the teams that will travel to Australia in October to participate in World Rugby League Nines were announced, with Papua New Guinea joining England, Australia and New Zealand.

Following these two major announcements there has been plenty of discussion about the teams selected in the Rugby League World Cup (and consequently those that missed out) and additionally, in relation to the Nines, some new rules will be tested including a 20/40 rule which has the ability to light up the women’s game.

In Australia we are counting down to the commencement of this year’s instalment of the NRLW, but in England their competition is reaching its crescendo. While the Women’s Super League will continue for the next couple of weeks, on Saturday we saw the Leeds Rhinos play the Castleford Tigers in the Women’s Challenge Cup, with Leeds looking to defend the title that it won in 2018.

The Challenge Cup is a knock out rugby league cup competition organised by the Rugby Football League. 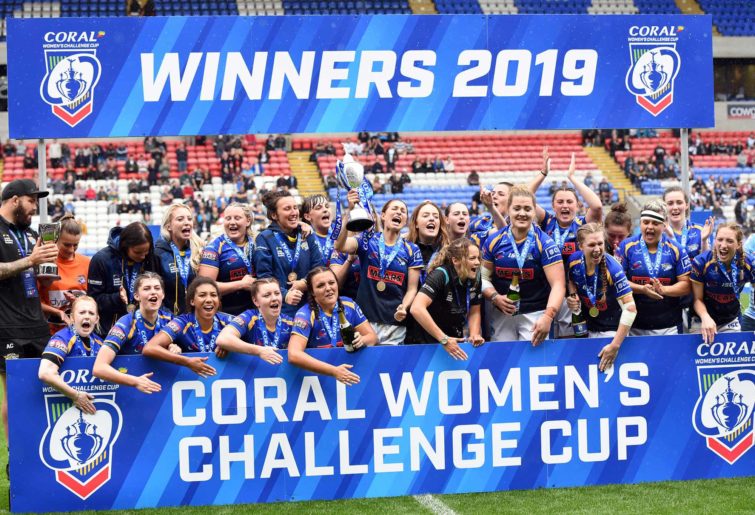 The final was a gripping, entertaining encounter with the Rhinos coming away victors 16-10.

With both of the Yorkshire-based clubs heading west to Bolton University Stadium, Castleford were red hot favourites leading into the match after a clinical and flawless Challenge Cup campaign.

This flawless campaign looked like it would continue when Rhiannon Marshall scored first in the corner to put the Tigers in front early.

Leeds had a tougher campaign; grinding out a semi-final win that went down to the wire against a highly-fancied St Helens outfit, they travelled to Bolton a depleted unit. They were forced to play without inspirational club captain Lois Forsell who was ruled out of the final through injury.

They were boosted however by the presence of Danika Priim and Tasha Gaines who missed the opportunity to play for the Rhinos in this same fixture last year, but were available this year.

Despite this somewhat disrupted campaign Leeds came to the game battle-hardened and quickly countered with a try to 16 year-old Fran Goldthorpe levelling the scores.

Then Caitlin Beavers shot the Rhinos ahead with another spectacular four pointer, giving the team a huge boost heading into the second half.

The 4000-strong Castleford contingent got involved and made themselves heard early in the second half. Off the back of that support, Tamzin Renouf was able to score under the posts and set up a grand stand finish with both teams tied in the second half.

But the day belonged to Leeds. Aussie import Courtney Hill scored a 60-metre try to give Leeds the winning edge which they managed to hold onto until full time. She was awarded player of the match for her efforts on the day including assuming the captaincy for the injured Lois Forsell.

For those Aussies paying attention, Courtney’s name may ring a bell; she played alongside our very own Ash Barty in the WBBL. In her first season in the United Kingdom she won a Challenge Cup and reached the Super League grand final with Leeds.

Potentially more exciting than the finish were the other stories which emerged leading into this game. 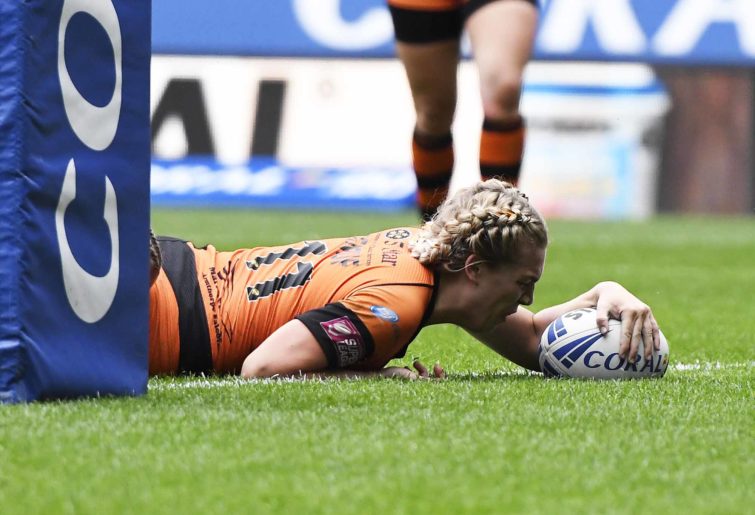 Similar to many female athletes in Australia, the women competing in this Final all juggle day jobs, university commitments and families alongside their sporting commitments. They play because they love rugby league, which is truly inspirational.

Take Claire Garner, who played halfback for the Tigers. When Claire isn’t playing rugby league, she is part of the helicopter arm of the National Police Air Service, working as an observer. No stranger to Challenge Cup Finals, having won one previously with Bradford, Claire was one of the stand outs on the day for the Tigers.

Then there’s Shona Hoyle, the Castleford prop. When Shona isn’t playing rugby league, she is an education support worker at a school which supports autistic children. When Shona was selected to play for England in the Rugby League World Cup in 2017, the school were right behind her, sponsoring her efforts.

But the stories were not limited to the players. Caitlin Beevers was the referee on the day. Caitlin was the first female to officiate at Wembley when she refereed the Champion Schools precursor to last year’s Challenge Cup Final. Her heroine? Belinda Sharpe who recently became the first woman to officiate an NRL game just two weeks ago.

Six years ago I had no idea women’s rugby league existed. To see women’s rugby league flourishing and spreading like wildfire across the globe is very encouraging and will ensure that the talent continues to improve and prosper as we countdown to the 2021 Rugby League World Cup.

The next big question for the Rugby Football League is whether the women should play in a double header before the men.

As Aussies it’s hard for us to grasp just how big an occasion the Challenge Cup Final is. Fans from all over the league loving north descend on London for an all out festival of rugby league. When you step out of Wembley Park station and look out at Wembley Walk towards the stadium it is truly one of the great sights in sport.

It would be amazing to see the women it compete on the biggest of stages and spread the rugby league message to women in the capital and beyond.

With the game getting promoted on major free-to-air networks earlier this week and more clubs having plans for women’s teams there really is no limit to how big women’s rugby league can be around the world.