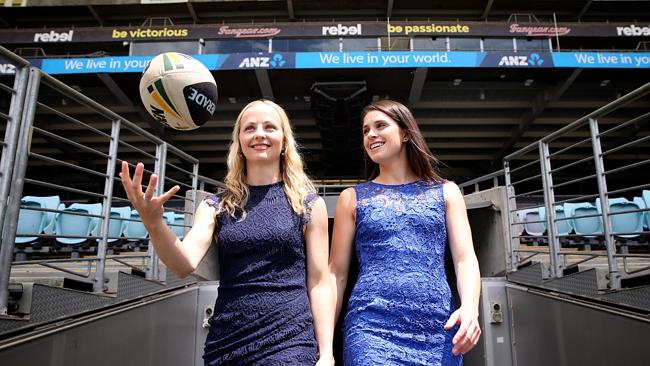 Female ref says her gender is no restriction.

As I watched my then 4 year old son run towards the tackle bag I felt a surge of pride, even as he stopped short and playfully leaped at it. Not exactly a hard hitting tackle but this rugby league fan mum was thrilled nonetheless. Then she appeared … a blue eyed, curly haired little girl who ran rings around the boys. She barrelled full force into the tackle bag and passed the ball like a pro. Another parent made the comment ‘shame she’ll have to give it up in a couple of years.’

Rugby league is still pretty much a mans game. When I was a kid there were no dreams of playing though I did briefly think about  being a match official. It would have been quite controversial then…30 odd years ago. But things are looking up.

In round 26 of 2014 for the first time a woman ran up and down the sideline of a first grade NRL game. It was at that classic of suburban grounds, Leichhardt oval, the eighth wonder of the world to Wests Tigers fans and a rugby league institution. It was Wests Tigers v Cronulla Sharks and on that day at that magic oval things changed. Suddenly the term ‘women in league’ took on a whole new meaning.

“My debut was exactly what I expected. It was fast and physical, and such a thrill to be a part of. I was nervous before the game, but the team of officials I ran with were fantastic and very supportive…”  These words from that very match official, working as a touch judge in that match, Belinda Sleeman. There was a bit of fuss, after all this is a sport that has been dominated by men for over a hundred years. Though while Sleeman, 28 was living a dream it was one, she insists, not made harder for her by being a woman.

“ It’s certainly nice to be acknowledged for doing well as a female in rugby league, and I suppose I understand that it’s still a fairly unique situation, but at the end of the day I see it as doing something which I enjoy and have a passion for. I have followed the same pathway as all the other officials, so it proves that if you are committed enough, gender is not a restriction.”

Sleeman, like myself grew up watching the game and wanted to get involved. She says that her family fully supported her desire to be a match official.  Though when she first started out on Sunday mornings refereeing  the under 7’s and 8’s she admits it was purely for fun. “…but as I moved up through the grades, I suppose my competitive nature started to kick in and I decided I really wanted to try and break through to the higher grades.”

Sleeman graduated to refereeing the juniors in her home town of Rockhampton before moving to Brisbane in 2008 to join the QRL Referees Academy. Despite what fans might believe being an official is not easy regardless of gender. Sleeman explains it is a lot tougher than people think, both physically and mentally.  “People are always very surprised to hear about the amount of training, both physical and mental, that we do on a weekly basis. At the end of that day, we have to be able to keep up with the play and while we may not take the physical contact the players do, we too work extremely hard during a game, combined with making hundreds of decisions under fatigue.”

Those decisions are often the cause of much controversy so it’s little wonder that training involves preparing for and dealing with these mental factors.  Not only must a match official  have a certain level of commitment, Sleeman says it  is also essential to establish a strong support network to help with the ups and downs that are part of the job.

In a time when there is a huge question mark over suburban grounds it is interesting to note that Sleeman’s debut at Leichhardt felt special to her. So it’s not just the fans that want to keep those grounds. “Of course, the big stadiums are always great to run on, but those small suburban grounds that have been a part of the game for such a long time are wonderful for fans to get so close to their favourite players, and the sense of history and nostalgia you feel when you run out there is very special.”

Whether or not we keep suburban grounds is one thing but we can be certain the term ‘women in league’ will keep evolving, thanks to pioneers like Sleeman. No longer just behind the scenes, we will be seeing more young girls emboldened to take up refereeing or even playing. I would like to think that little girl at my sons footy practise has more options than that parent suggested.

For now though Sleeman herself has her heart set on being the best she can be. Her goals are unassuming. “I don’t tend to set goals by milestones or particular games, I just want to make sure that I’m always learning, always improving, and working hard on and off the field. It’s an old cliché but controlling what I can control just keeps things simple…I feel privileged to be in a position I’m in, so I want to make the most of every moment.”

I think she is being too modest. I believe her work ethic and skill will lead the way and we will be seeing a woman refereeing a grand final or state of origin in the not too distant future. Bring it on I say.